The Rapture of Canaan 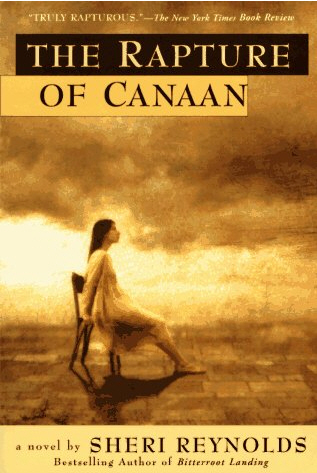 (This review first appeared in December 2002)

Who doesn’t love a good story about a young girl growing up in a religious cult in the backwoods of the Southern U.S.?

In this case, the narrator’s grandfather is the founder and preacher of The Church of Fire and Brimstone and God’s Almighty Baptizing Wind. As you would expect, he is both charismatic and fanatical, and his followers are prone to speaking in tongues.

Throughout her childhood, the story Ninah most frequently hears her grandfather preach about in his church concerns her great-grandmother, the mother of the women married to the church’s founder:

“My own wife Leila, who you all know, my own wife turned her back on God. Turned her sinful eyes away from God and lied. Lied to the very people who were trying to bring a murderous whore to justice… Just a child. Just a wee child but old enough to know the difference in right and wrong. She saw her own mother engaging in sins of the flesh and did not tell. She allowed it to happen.”
“Allowed it to happen,” my mamma would yell out.
“And on the day that her own mother pulled out a rifle and shot her father through the back so she could live in sin with a boy young enough to be her son, what did Leila do? Did she call out to God?”
“No, Lord,” my brother Everett would answer.
“No. No, she did not call out to God,” Grandpa Herman would continue, the tears sliding down his rough cheeks.
I’d look over at Nanna, who’d roll her eyes at me and then sneak me a wink.

Fourteen-year-old Ninah’s voice is perfect and the story has several unexpected twists. I don’t want to give anything away, so I’ll just say that a startling series of events eventually leads to exchanges such as this:  “Wow, Ninah,” he said. “All that time I thought you was just an average—well, you know—slut. And come to find out you’re chosen by God.”