The House at Sugar Beach 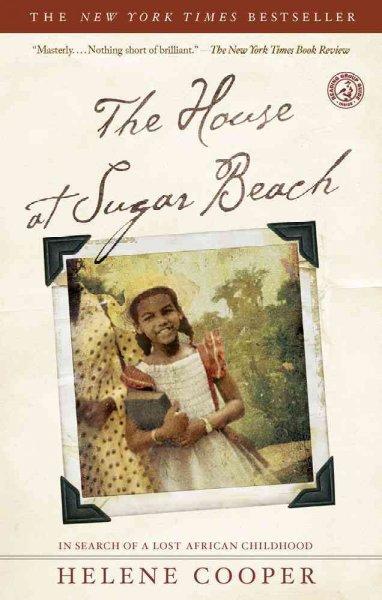 The House at Sugar Beach: In Search of a Lost African Childhood, by Helene Cooper. Simon & Schuster (2008), 351 pages.

Liberia was founded in 1822 by freed American slaves. It was an experiment of sorts, funded by white Americans who foresaw difficulties with freed blacks living alongside enslaved blacks, and decided the problem could be solved by sending the freed people “back” (a good percentage were born in the U.S.) to Africa.  On board the very first ship—Liberia’s Mayflower, so to speak—was author Helene Cooper’s great-great-great-great-grandfather on her mother’s side. Her ancestry on her father’s side dates back almost as far, to 1829. This pedigree made Helene part of Liberia’s elite, privileged class. A twenty-two-room mansion overlooking the Atlantic, a vacation house in Spain, private schools, servants, and the security that comes with being part of the ruling class—throughout the 1970s Helene grew up like a princess. However, in 1980 a coup abruptly ended all this as the native people (those descended from African tribes who had no American roots) seized power and Liberia descended into complete chaos, from which it has still not recovered. One day Helene looked out her window and saw a truckload of soldiers driving up to her house, and that was that—her family lost everything they had but was lucky enough to have connections that allowed Helene to move to Tennessee within the month. As you might imagine, being a black teenager in rural Tennessee who spoke Liberian English and had limited resources for the first time in her life required substantial adjustment. I particularly sympathized for her almost visceral pain at being hours away from the ocean.

Her Black classmates in Tennessee would antagonize her:  “How come you’re not dark-skinned, if you’re from Africa?” Here is the most fascinating thing I learned about Liberia: the upper class were all quite light-skinned because a good percentage of the original American settlers in the 1800s were half white. What happened with some frequency, apparently, was that plantation owners who had fathered children with their slaves then gave the children their freedom, perhaps out of guilt, perhaps to get rid of the “evidence” of their adultery and thus smooth things over with their wives, who were often exceedingly cruel to these children. The irony is that once free, these settlers recreated a very American-like, racially divided culture in Liberia in which the dark-skinned natives were segregated, looked down on, and lived in abject poverty—unless they were lucky enough to get a job as a servant in one of the mansions owned by the light-skinned elite.

The writing style in this book is very similar to that of Finding Mañana, probably because both authors are award-winning journalists. (Helene was a foreign correspondent for the Wall Street Journal for more than a decade, which becomes a critical plot point toward the end of her memoir.) And both authors were teenagers when they were forced, due to complete governmental collapse, to flee a country where they had been incredibly happy. So anybody who enjoyed Finding Mañana should read Sugar Beach, and vice versa. Actually, anybody interested in the effect of foreign coups, takeovers, and revolutions upon happy young children should read both books. It can be tricky to strike the right balance in a memoir between the child’s point of view and the larger historical/political framework, but these books succeed wonderfully.

Liberia and the U.S. have a shared history that many of us are unaware of…. Sugar Beach should be required reading in our high-schools as it offers not only important history but also thought-provoking illuminations on race relations and racial identity.

EXCERPT:
Heartmen are witch doctors who kidnap people and cut out their hearts while they’re still alive and use it to make medicine. Now that I was sleeping in my own room at night, they had the perfect opportunity to come get me and cut out my heart and I would die before I woke.

They floated into the room that night as I slept, two of them, their cutlasses strapped to their waists. Long gleaming knives that curved at the tip…. I ran out the bedroom door as fast as I could, straight in to Mommee and Daddy’s bed, refusing to leave until morning.

The next day, the Mandingo men came to sell Mommee more ivory, to replenish her reserves, which were being rapidly depleted by the nightly visits from the rogues. Any private detective worth his two cents could have immediately figured out that the Mandingo men who sold Mommee the ivory had the most to gain from the constant burglaries, but Mommee welcomed them in anyway.

They came, in their customary long white flowing robes and their white pointy slippers. Two tall statuesque haughty men, with skin the color of a Hershey’s chocolate bar. They walked up the dirt road to Sugar Beach, carrying barley bags, the sharp end of one of the elephant tusks poking out, gleaming in the sun.

Marlene’s dogs, Happy, Blackie, and Christopher, started barking as soon as the men entered the yard, rousing themselves from their usual slumber under the kitchen steps and running around the men furiously. They were all mutts, distinguishable by color: Happy was light brown, Blackie was black, and Christopher was white. Happy, in particular, was yipping around the Mandingo men’s ankles. But the Mandingo men didn’t even flinch. They walked right up to the steps and asked for “Ma.”

I didn’t understand how they could wear those long robes in the heat. It was the height of Liberian summer—January—and there wasn’t the slightest breeze, not even from the ocean right at our backs. I was in shorts and my favorite Wonder Woman T-shirt, which the men eyed disapprovingly. “How they looking at people so?” I muttered to Old Man Charlie, standing next to me on the kitchen porch.