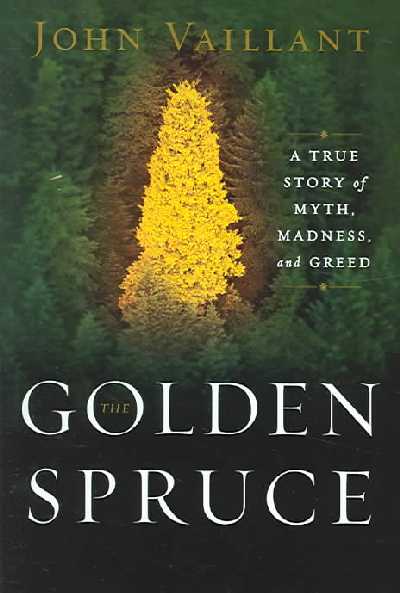 The Golden Spruce is the story of the total destruction of the coastal old-growth forests in British Columbia. The flap copy of the book tells us the golden spruce of the title was chopped down by Grant Hadwin, a logger turned environmentalist, which makes no sense at all until you read the book. Though the death of the tree is sad, tragic even, the author’s writing left me seeing and feeling exactly what Hadwin saw, a “pet tree” used by the logging companies and the island residents to distract themselves from the destruction of the rest of the forest. As Vaillant asks, how does one punish a person who cuts down a sacred tree as an act of protest when the surrounding forest has already been felled for profit?

There are pages and pages of thought-provoking descriptions of forests in The Golden Spruce that (unlike the tedious, interminable descriptions I find so annoying in books like Cold Mountain: “The bird alighted on the tree and a leaf fell and I saw that the sky was blue, with some clouds, and I looked at the tree again and then I wondered if it might rain and I saw a rabbit run by and then another leaf fell, a red leaf.” Okay that wasn’t a real quote but it might as well have been) are so beautifully written they almost make me cry.

EXCERPT:
A coastal forest can be an awesome place to behold: huge, holy, and eternal-feeling, like a branched and needled Notre Dame, but for a stranger it is not a particularly comfortable place to be. You can be twenty paces from a road or a beach and become totally disoriented; once inside, there is no future and no past, only the sodden, twilit now. Underfoot is a leg-breaking tangle of roots and branches and, every fifty feet or so, your way is blocked by moss-covered walls of fallen trees that may be taller than you and hundreds of feet long. These so-called nurse logs will, in turn, have colonnades of younger trees growing out of them, fifty years old and as orderly as pickets. In here, boundaries between life and death, between one species and the next, blur and blend: everything is being used as a launching pad by something else; everyone wants a piece of the sky. Down below, the undergrowth is thick, and between this and the trees, it is hard to see very far; the sound of moving water is constant, and the ground is as soft and spongy as a sofa with shot springs. You have the feeling that if you stop for too long, you will simply be grown over and absorbed by the slow and ancient riot of growth going on all around you.

This review first appeared in January 2006
By Cindy Blackett