The Crimson Petal and the White 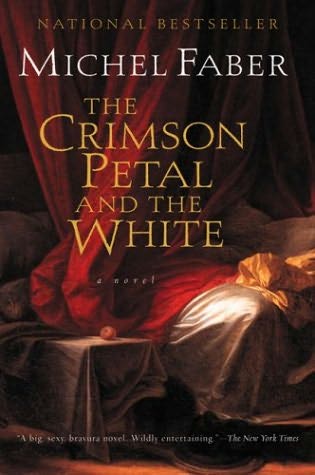 (This review first appeared in January 2004)

It is a theory he’s toyed with for a decade or more, though he’s sharpened it recently; it involves the abolition of what he terms “unjustifiable capital,” to be replaced with what he terms “equity of fortune”. This means that as soon as a man has made a large enough fortune to support, perpetually, his household (defined as a family of up to ten persons, with no more than ten servents), he is banned from stockpiling any more. Speculative investments in Argentinian gold-mines and the like would be prohibited; instead, investment in safe and solid concerns would be overseen by Government, to ensure that the return, although unspectacular, was perennial… So there you have it: the thoughts (somewhat pruned of repetition) of William Rackham as he sits on his bench in St James’s Park. If you are bored beyond endurance, I can offer only my promise that there will be fucking in the very near future, not to mention madness, abduction, and violent death.

With a quote like that, this review practically writes itself. Let me add, however, that in addition to the above mentioned fucking, madness, abduction, and violent death, you will find teenage prostitutes, untrustworthy servants, and small children in peril. It doesn’t get much better than that. Michel Faber has written a beautifully plotted book that is somehow still more character- than plot-driven. His descriptions of Victorian London are microscopic in detail and yet never distract from the story. They are, in fact, every bit as compelling as the characters themselves. (Those of you who know how annoyed I become with page after page of interminable description must appreciate what high praise this is.) This book is also remarkable in that it expresses a deep understanding of women’s inner lives, and of gender and sexual politics, yet it was written by a man. I am always highly skeptical of books by men writing from the point of view of women because they invariably get it so completely wrong. Michel Faber is the rare exception to this rule.

There are a few flaws—the narrator is a little awkward in the beginning (though I eventually grew to love his sarcasm) and the Henry/Emmaline Fox sections were too long and detracted from what I felt was the main storyline. That said, however, this is a fabulous book; I can not possibly recommend it more highly.