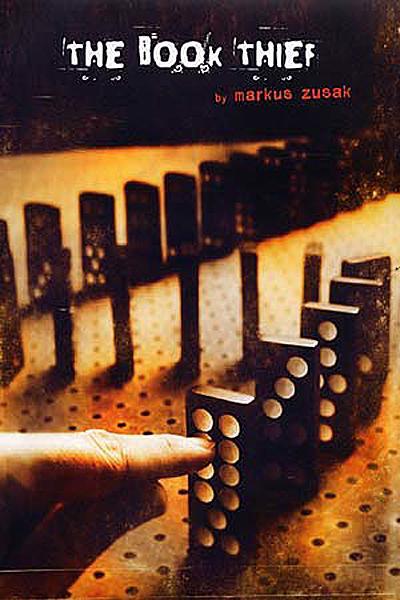 (This review first appeared in February 2007)

This is the story of a German girl living in a foster family in a working-class town in Germany during World War II. Such a setting encompasses, of course, all of the grand drama you would expect: tragedy, devastation, Nazis, death camps, the insanity of it all. And the little girl herself, the intrepid book thief, is an appealing enough heroine. But the real star of the book is Death, the narrator. It is Death that kept me turning the pages. He has one of the most unique voices I’ve ever come across, at turns sarcastic, compassionate, funny—Death is strangely endearing.

I do not carry a sickle or scythe. I only wear a hooded black robe when it’s cold. And I don’t have those skull-like  facial features you seem to enjoy pinning on me from a distance. You want to know what I truly look like?  I’ll help you out. Find yourself  a mirror while I continue.

I actually feel quite self-indulgent at the moment, telling you all about me, me,me. My travels, what I saw in ’42.  On the other hand, you’re a human—you should understand self-obsession…  There were certainly some rounds to be made that year, from Poland to Russia to Africa and back again. You might argue that I make the rounds no matter what year it is, but sometimes the human race likes to crank things up a little.

They increase the production of bodies and their escaping souls. A few bombs usually do the trick. Or some gas chambers, or the chitchat of faraway guns. If none of that finishes proceedings, it at least strips people of their living arrangements, and I witness the homeless everywhere. They often come after me as I wander through the streets of molested cities. They beg me to take them with me, not realizing I’m too busy as it is. “Your time will come,” I convince them, and I try not to look back. At times I wish I could say something like, “Don’t you see I’ve already got enough on my plate?” but I never do.