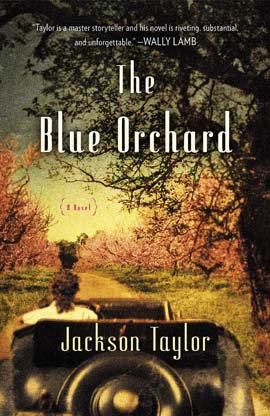 Taylor’s novel about abortion in America, from the Depression to the early 1950s, is based on events in his grandmother’s life and on interviews with many of the central figures involved. The fictional Verna Krone is born in 1912 to a poor rural Pennsylvania family. At age thirteen she is sent away to find work as a maid in order to support her struggling family. She is raped, becomes pregnant, has an illegal abortion, and then after another pregnancy returns home with a son.

Verna then leaves her child with her mother and returns to the city, eventually finding work as a nurse for a black doctor who performs abortions. Taylor writes about the history of illegal abortion in Harrisburg (many politicians, judges, clergy, and wealthy businessmen sent white women to this respected black doctor, while publicly condemning abortion as criminal), and about the politics of race, class, gender, and religion.

The first part of The Blue Orchard, before Verna becomes a nurse, reads like great fiction. The plot is gripping, the characters feel absolutely real, the dialogue is perfect. I was loving this book. Then, as Taylor moved into the second half in which Verna meets the doctor and becomes embroiled in the real-life events of the day, the story gets lost. The characters begin making long-winded, boring speeches, and the plot falls away in favor of a detached recitation of facts and history.

At the end of the book the author says he wrote this novel “after almost three hundred interviews with those involved in the real-life scandal.” This, I would suggest, is exactly the problem. A book that aspires to be both fiction and “true-life” usually ends up doing neither one well. The fiction parts sound artificial because the characters speak like they are being interviewed (which they were) and the nonfiction parts fail to convince since one never knows for sure which details are real and which are made up.

I recently gave up in exasperation on Alice, I Have Been (a blending of fact and fiction in the life of the “real” Alice of Alice in Wonderland and the author Lewis Carroll) for the same reason I can’t recommend The Blue Orchard. I do wish authors would discontinue this frustrating trend and simply choose one or the other. Tell us a story, or tell us the truth. You can’t have it both ways.

Update, May 22: I just gave up on yet another book (Charlotte and Emily: A Novel of the Brontes) in which an author attempts to create fiction out of the lives of real people. The writing was beautiful, the setting perfect, and it reminded me very much of The Dress Lodger, which as we know is one of the best books ever written. Unfortunately (and predictably) it quickly fell apart as the author included far too much of the real lives of the girls and destroyed what could have been, in a work of fiction, a truly great story.

EXCERPT:
From the first half:
When Ruth looks directly at you, which is rare, her eyes pinch with scrutiny.  She displays a creased brow and wiry hair held in place by thick bobby pins that she bites open.  At home she often lets the hair hang loose and from time to time it shows up in our food.  She believes in the gospel, and in Christ, and prays to inspire others with her strength, drawing power from her private suffering with God. Sometimes, from the sidewalk, she’ll cast her hard eyes at the neighbors, studying every household on the block, noting who hasn’t swept their walk, or painted their porch columns, while at the same time cataloguing the history of their faults, trials, missteps, not to mention their riches.

From the second half:
It says Frederick is an engineer who has just retired from a big concrete manufacturing company out of Chicago and moved to San Mateo, California. His work took him around the nation, and in our region he helped design the Army Depot in New Cumberland, as well as the Pennsylvania turnpike tunnels through the Allegheny Mountains.