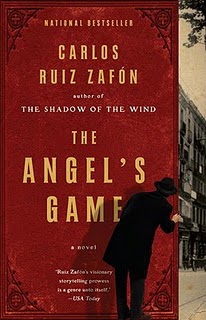 Blech. What a relief to be done with this. And what an unexpected turn of events, given that the first third of the book was quite enjoyable. As good as Shadow of the Wind! I said to myself. He’s done it again! But no, he has not done it again. Except in the sense that the setting is identical: a dark and gothic early-twentieth-century Barcelona. Even some of the characters from Shadow of the Wind are here, as is the Cemetery of Forgotten Books. So he did do that part again.

The parallels between the two books were not bothersome, because as every reader of Shadow knows, Zafón is thoroughly brilliant at dark and olden-days Barcelona, so why shouldn’t he revisit it? It’s not as though other authors are doing the same and the market is saturated with mysterious and sinister Barcelonian dealings. So I was quite happy to visit again and only became disenchanted when it became clear that the writing in The Angel’s Game simply isn’t as good.

The main character, David, is an author squandering his talents on mass-market thrillers: “penny dreadfuls packed with intrigue, high society murders, countless underworld horrors, illicit love affairs featuring cruel, lantern-jawed landowners and damsels with unmentionable desires, and all sorts of twisted family sagas with plots as thick and murky as the water in the port.”  We, the readers, are meant to understand that David is actually a literary genius, trapped into writing these books for the money but actually able to turn out works of brilliance when inspired. It’s funny, because David’s a lot like Zafón—an author who proved his literary gifts beyond all doubts with his first book for adults (he previously wrote four YA novels that I have not read) but flounders here in the depths of extreme melodrama featuring ridiculous heroines, over-the-top murders, and plot twists too silly to take seriously.

Is this some kind of joke? Is Zafón trying to admit, through an alter ego named David, that he has intentionally written a “penny dreadful” to make some quick cash?

EXCERPT (from the first, readable third):
The whole of Barcelona stretched out at my feet and I wanted to believe that when I opened those windows—my new windows—each evening its streets would whisper stories to me, secrets in my ear, that I could catch on paper and narrate to whomever cared to listen. Videl had his exuberant and stately ivory tower in the most elegant and elevated part of Pedralbes, surrounded by hills, trees, and fairy-tale skies. I would have my sinister tower rising above the oldest, darkest streets of the city, surrounded by the miasmas and shadows of that necropolis which poets and murderers had once called the “Rose of Fire.”

EXCERPT (from the last, unreadable third):
I raised the weapon and pointed it at his face. The sheen of the metal gave me away. Marcos jumped at me, knocking down the dummies and dodging the shot. I felt his weight on my body and his breath on my face. The scissor blades closed only a centimeter from my left eye. I butted my forehead against his face with all my remaining strength and he fell to one side. Then I lifted my gun and pointed it at him. Marcos, his lip split, sat up and fixed his eyes on mine.

“You don’t have the guts,” he whispered.

He placed his hand on the barrel and smiled at me.