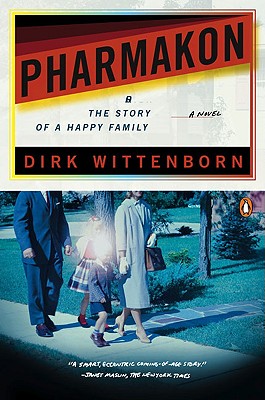 Pharmakon…or the Story of a Happy Family, by Dirk Wittenborn. Penguin Books (2008), 404 pages.

The father in this novel is a psychology professor at Yale who has determined that his route to fame and fortune will be his invention of a pill to cure depression. It is 1951, and interest in the pharmacological side of psychology is growing; the timing is perfect and he has even pinpointed exactly which plant he will use in the development of his pill—it is found in New Guinea, and is supposedly used by natives as an aid in overcoming stress. Things go terribly wrong, however, as he begins his research study with the substance, and as a result the family’s life for the next fifty years is shadowed by the presence of an unstable man who persistently stalks them.

Wittenborn brilliantly captures the nuances of family life—the interactions, the secrets, and the way the idea of “family” changes over time. I’m reminded of Jonathan Franzen’s The Corrections. Both books astutely explore family dynamics from the point of view of a single family, roughly covering the latter half of the twentieth century, and the two authors are equally talented. I highly recommend Pharmakon.

EXCERPT:
Dr. Friedrich had no idea his wife had purchased an open steamship ticket to France on the Holland America line when she was seven months pregnant with Fiona. It was a one-way ticket, passage for one, good for any crossing, bought with the two hundred dollars Nora had never told Friedrich her great and maiden aunt Minnie had given her the morning of their wedding. “Just so you can always change your mind,” was what Minnie had said. Nora Elizabeth Friedrich, nee Hughes, knew how to keep things hidden. The ticket lay buried in her underwear drawer beneath a negligee her mother had given her for her wedding night, and that she had been too impatient to put on.

Jack lay sprawled across the front seat, head on her lap, sleeping. The fountain pen she hadn’t noticed him take out of her purse was clutched in his hand, cap off. She knew the blue ink that had leaked out onto the white of her Mexican skirt wouldn’t come out. Will had given her that dress when they were still in college. It had red flowers embroidered around the hem. It made her feel like someone else, someone exotic, someone like that Mexican painter she’d read about in the paper with the one eyebrow. It took her a moment to remember the name. But she wasn’t a Mexican painter, she was a mother, and mothers have to learn to leave some things in the drawer. Willy was poking her in the back of the head with the fishing rod she was getting tired of reminding him not to play with. “Willy, stop that.” She forgot about the bleeding pen.

For the third time, Willy inquired, “Who’s cold-budded?”
“It’s cold-blooded, Willy, and nobody we know is that way; we only know nice people.” Nora wasn’t feeling nice. Why not tell them how it really is? Nice is the exception. Less than nice is the rule. Why make them learn the hard way?