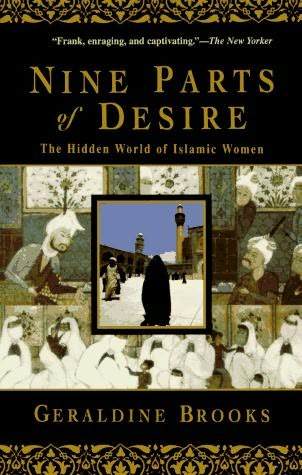 Before writing Year of Wonders, Geraldine Brooks worked as a reporter (Middle East correspondent) for The Wall Street Journal and lived in numerous countries throughout the Middle East for almost a decade. She seems to have been personal friends with everyone: dinners with Queen Noor of Jordan, casual visits with Khomeini’s daughters in Iran, conversations with a woman who personally helped hold the American Embassy hostages at gunpoint in Iran in 1979—all are discussed in the book as though it’s completely normal, with absolutely no speck of a self-congratulatory “and I was there!” attitude.

Throughout her years in these countries (Iraq, smack in the middle of the first Gulf War; Iran; Israel; Palestine, where she chases down the teenager who smashed her windshield with a rock and subsequently lives with his polygamous family for many weeks; Saudi Arabia; Egypt), her consistent and determined goal is to understand the lives of Muslim women. In particular, she focuses on how each of these different cultures uses Islam to explain/justify vastly different treatments of women, despite the fact that the Koran is often either silent on the subject or actually says the opposite of what is being espoused. She goes to great lengths to explain precisely what the Koran says (as a speaker of Arabic, she’s able to explain many inconsistent translations) and with her vast reporter’s talent she gives a very clear overview of Islam’s beginnings, always explaining how these beginnings relate to current traditions.

Many of the worst human rights abuses are actually not “in the Koran,” but rather than using this as a defense of the religion, as many do, she is outraged that its leaders are not speaking out against those who commit terrible crimes in the misguided name of the religion. For example, clitoridectomy is not mentioned in the Koran, and Geraldine quotes a female Muslim writer who is angry that people don’t know “this was an African practice that has nothing whatsoever to do with Islam.” Geraldine’s well-thought-out response is to wonder why such people “turn their wrath on the commentators criticizing the practices, and not on the crimes themselves….could [the Muslim writer] not have taken the trouble to reflect that one in five Muslim girls lives in a community where some form of clitoridectomy is sanctioned and religiously justified by local Islamic leaders?”

Geraldine is highly skilled at providing an insider’s understanding of and respect for these cultures while simultaneously explaining all of the inconsistencies, hypocrisies, and outright lies. I was reminded often of Krakauer’s Under the Banner of Heaven—partly because the writers are similarly talented at explaining a religion, but also because the two religions really are surprisingly similar, with their incredibly intense fear of women’s independence and their fondness for polygamy and child brides. Most eerily similar of all is the fact that both Muhammad and Brigham Young received “revelations” about polygamy that were oddly in tune to problems the prophets were facing that day. “Muhammad’s increasing number of divine revelations on women seemed more and more influenced by the need to achieve tranquility in his own household. Aisha, for one, wasn’t afraid to point out the coincidence. ‘It seems to me,’ she said tartly, ‘your Lord makes haste to satisfy your desires.’” This insightful Aisha, by the way, was the wife that Muhammad married when she was six. She is one of the most fascinating people in the book’s history section.

The conclusion of the book—just the last fifteen pages—has a tone rather different from the rest and very, very similar to the end of Infidel. Suddenly, it becomes clear that Geraldine is trying to warn us. Though I was unaware of it at the time, the first 95 percent of the book was meant to be background knowledge so that I would understand and heed the message in the conclusion. Like Ayaan Hirsi Ali, Geraldine sees danger looming. What is especially interesting about this message is that this book was written in 1995. Islamic fundamentalists had not yet hit the mainstream media and nobody had heard of any terrorist attacks; this book was ahead of its time.

EXCERPT:
A United Nations human rights report finds Sudan’s Koran-based punishments in conflict with the international human rights agreements the country has signed. In response, the government of Sudan threatens the report’s Romanian-born author with death…. In Algeria two women are gunned down at a bus stop because they are not veiled…. Like the Rushdie fatwa, these incidents come at us from so deep in left field that we, as Westerners, have no coherent way to think about them. We shrug. Weird foreigners. Who understands them? Who needs to? And yet, as I made my home in London, gradually shaking the last few fine crumbs of Cairo dust from the pages of my books, I found that the background noise of Islam remained always there, in the distance, like a neighbor hammering. And eventually I accepted that it was neither possible nor right to ignore it.

This review first appeared in July 2008
By Donna Long