Love Is a Four-Letter Word 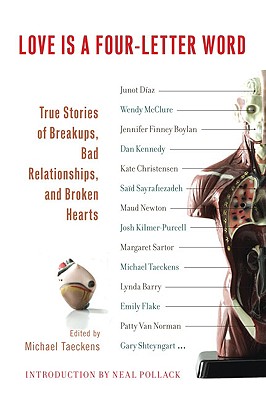 Essays on love, break-ups, and relationships tend to fall into one of two camps: serious writing—which can come across as self-absorbed and self-pitying (particularly if the writer is young enough to believe his suffering surpasses everything anyone else has ever experienced) or light writing—which risks veering into chick-lit (or, equally unfortunate, lad lit) territory.  This collection of twenty-three humorous essays steers clear of both pitfalls.  It is light (without being “lite”) and almost every essay is very funny and very well-written.

The contributors include many well-known novelists and memoirists:  Junot Diaz, Jennifer Finney Boylan, Josh Kilmer-Purcell, Said Sayrafiezadeh, as well as two graphic artists—Lynda Barry and Emily Flake. There are a few weak stories, in particular Brock Clarke’s,  which begins with a promising first sentence, “She didn’t leave me with a broken heart, but she did leave me bleeding from both wrists and lying faceup in a puddle of someone else’s vomit, wearing someone else’s shirt,” but then devolves into pointless repetition and ends with the reader feeling annoyed at having listened to a long tedious story waiting for a payoff that never comes.

Several of the outstanding entries include Jami Attenberg describing a new relationship:

“You realize that he only has one sex trick, the sex against the wall.  Like he saw it in a movie once and decided if he could just do that he would be the best lover ever and then he never decided to learn any other trick again.  A one-trick pony.  You picture him whinnying and waving a long, dirty mane in the air. Pawing the ground sadly.”

Wendy McClure’s portrayal of the boyfriend we all know is wrong, but she keeps dating him anyway:

“Things that indicated he wasn’t quite what I thought he would be, but chose to ignore for the time being:
1. The Guggenheim thing clearly wasn’t going to work out, considering the only thing he’s published had been a Listmania! list he’d posted on Amazon.com, with his favorite books, mostly surrealist erotica.   ‘Literary Journeys into the Dark Dreamworld of Sexuality,’ the list was called, ‘by Benjamin J. Gottlieb, Writer.’
2. He couldn’t show me his novel yet or say how long it was because it was still untyped.  Like, all of it.
3. He only rode his bike when he couldn’t depend on someone (like me) for a ride.
4. He had no driver’s license.
5. Or bank account.”

And Dave White’s hilarious account of the one-night stand who won’t go away:

“The sentence, ‘My boyfriend likes to _______,’ which was This Guy’s version of a good morning, is relevant for two reasons.   The first reason is that the sexual act he referred to, the one I’ve self-censored, is, as I’ve mentioned, a really boring one.  But his voice decorated it with a sort of porny Christmas-tree flocking and an icky sensuality that transformed him, in that moment, into a man wearing a Dacron, thigh-length bathrobe, holding a bottle of massage oil in one hand and a box of strawberry-daiquiri-flavored condoms in another… The other relevant fact is that this Guy called me his boyfriend after knowing me approximately eight hours.  Not being very hungover at all, I picked up on this, noting it as something of a howling siren of insanity.”