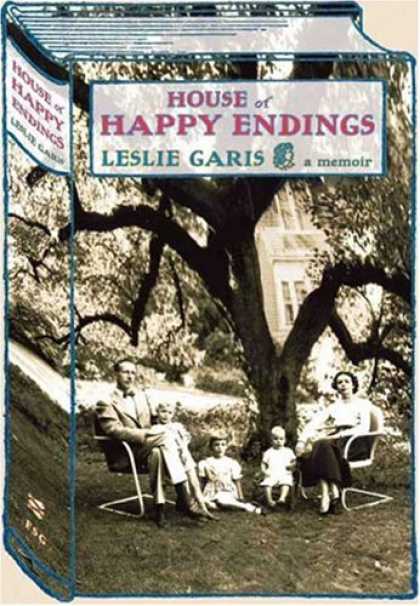 The title of this memoir refers to Garis’s grandfather’s stories for children (Uncle Wiggily, as well as Tom Swift and hundreds of others) in which each tale about Uncle Wiggily, the rabbit, must have a surprising and unexpected happy ending. In the case of the memoir, however, the title is ironic. Nothing at all ends happily.

Garis grew up in Amherst, Massachusetts, in a romantic old mansion named The Dell (now owned by Amherst College) with her brothers, parents, and grandparents. Lillian Garis, the author’s grandmother, was also a sucessful author of children’s stories (the Bobbsey Twins) and wrote most of the endings in the Uncle Wiggily books. Garis’s father Roger was a writer for New York Times Magazine, which he quit to become a full-time author when they moved to Amherst. This career move proved to be somewhat disastrous as Roger careened from one failed project to another. He started a magazine called The Pioneer: A Magazine for New England, which fell apart before its sixth issue, he wrote plays that never got produced, and he sent stories to magazines that were rejected and ideas to Hollywood that no one was interested in.

It turns out that the grandparents had been bankrolling Roger’s attempts to become a full-time author, and with the failure of the magazine, they moved into The Dell in order to save on expenses. Thus begins the very unhappy ending as we watch Roger descend into a pit of hopeless despair and eventually become confined to a mental hospital, and we discover that the author of the beloved Bobbsey Twins is actually a disturbed and angry tyrant, determined to make everyone around her (especially her son) as miserable as she is.

EXCERPT:
“Mother, let me help you,” he said gently, taking Lilian’s arm. “Mabs has done a wonderful job preparing your rooms.”
They proceeded to the stairs and up. I cut in front of them and ran ahead.
“You’ll love the curtains!” I said excitedly. “And wait till you see the wallpaper!”
Mom was behind us with Grampy, who was still holding Brooks’s hand. The adults chatted about the weather. Brooks, wrapped in shyness, was quiet.
At the door to her new room, my grandmother stopped and silently took in her surroundings. She removed and put back one of her fine hairpins. Dad went on with his father and Brooks to the next room. Mom and I waited expectantly for Granny’s reaction.
“I’m afraid this is entirely too bright,” she said at last. “Since I’m to live here, I need a more calming atmosphere. I’m surprised you didn’t know that, Mabel. I’ll need darker drapes. I have to rest most of the time, you know.”
My mother went white. “I thought this would please you. The curtains were very special. I made them myself. I think the room is lovely. So cheerful. I thought you’d want it cheerful.”
I felt stricken.
“It’s just not suitable for living in, Mabel. It might do for a guest room. You’ve made it very pretty—although I’ve never been partial to pastels. But I’m going to be in here most of the time, and you know my eyes are very sensitive to light. Are velvet drapes available? I’ll make some arrangements tomorrow. It will all have to be changed.”

This review first appeared in July 2008