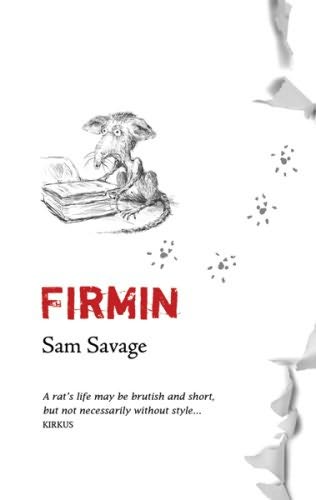 This little novella is light on plot, but the writing is so lovely a storyline hardly matters.  It’s hard to believe this is Savage’s first published work.  He has the kind of voice that appears to be effortless—as if he is one of those mythical writers who sits down and types the whole thing out in its final form, with no revisions necessary.

Firmin is about a rat who lives in Boston’s Scollay Square above a bookstore.  The bookstore, as well as the entire Square, is soon to be demolished for an urban renewal project.  That’s pretty much all there is to say about the plot.  It is Firmin’s passion for books (he learned to read while chewing on the pages) that really drives the story.  One could say Firmin is about rats, or urban destruction, or despair, or hope, but it is really a love letter to readers and bookstores and most of all to the books that have changed our lives.

EXCERPT:
Like many things that start as small, illicit pleasures, paper chewing soon became a habit, with its own imperative, and then an addiction, a mortal hunger whose satisfaction was so delightful that I would often hesitate to pounce on the first free tit.  I would instead stand there chewing until the wad in my mouth had softened to a delectable paste that I could mash against the roof of my mouth or mold into interesting shapes with my tongue and safely swallow.  Unfortunately, the chewed paper left a sticky coating on my mouth and tongue that lasted for hours and caused me to smack my lips in a truly unpleasant manner.