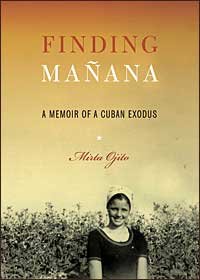 There was so, so much I didn’t know about Cuba. Considering that the country is only ninety miles away and intricately tied in many historically significant ways to the U.S., this book really should be required reading in our schools.

As a thirteen-year-old in 1980 I had vaguely heard of a lot of boats full of Cubans heading for Florida, but I never understood the significance of this in the context of Cuba’s history, nor did I fully grasp the complexity behind more recent stories of individual Cubans such as Elian Gonzalez, the 6-year old  forcibly removed from the closet by rifle-toting federal agents.

This is the type of memoir that is not merely concerned with the author’s life but also expertly weaves in a wealth of relevant nonfiction—in this case the Mariel boatlift of 1980, the history of Cuba, the plight—and successes—of Cuban immigrants in Florida, and the anguish and torment of families forcibly separated by politics.

This Pulitzer-prize-winning author excels at placing individual stories in historical context while simultaneously bringing the characters fully to life. It is a must-read.

EXCERPT:
Listening attentively from her perch under a mango tree was Mercedes Alvarez, a twenty-two-year-old nurse who was five months pregnant and had her three small children—aged five, two, and one—with her…. It took the family about an hour to find a place where they felt they could squeeze into the crowd and spend the night. Mercedes held  tightly to her children’s hands, fearing to lose them in the multitude. When they cried for milk, she gave them pieces of the crumbled cake and rocked them to sleep one after the other. Surrounded by their tiny bodies, she began to think of the consequences of what she had done…. It occurred to her that this might be a trap, that the government might send them all to jail. She was calmed somewhat by the realization that if anything happened to her, the government would still provide for her children’s health care and education. This paradox—that the same government she was trying to flee was also the one that she knew would take care of her children—made her question why she really wanted to leave her country….

Day and night, government-controlled radio stations droned over loudspeakers, urging the refugees to return to their homes, since Peru couldn’t do anything for them; they had to trust the Cuban government. Some people  stuffed cigarette butts in their ears to drown out the noise. Portable bathrooms were installed around the perimeter of the compound, but some refugees refused to use them for fear they would not be allowed to get back inside the grounds, preferring to relieve themselves in plain sight of other refugees. The garden soon became a fetid cauldron where it was difficult to walk and impossible to lie down….

This review first appeared in March 2007
By Donna Long