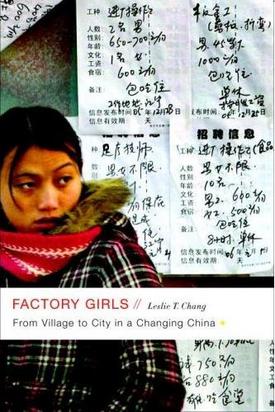 This book provides a multifaceted understanding of those three little words we cannot escape: “Made in China.” We think we have some understanding of the words—we know that for the factory workers the hours are long, the pay minimal, and the sorts of benefits that Americans take for granted more or less nonexistent—but we don’t really comprehend the all-encompassing subculture underlying those words.  I didn’t know, for example, the basic fact that an employee in China’s massive factory-cities does not have any sort of a residence outside her work but lives, sleeps, and eats on the factory premises. Carrin Electronics is typical: “The company made alarm clocks, calculators, and electronic calendar that displayed the time of day in cities around the world. The factory had looked respectable when Min came for an interview in March 2003: tile buildings, a cement yard, a metal accordion gate that folded shut. It wasn’t until she was hired that she was allowed inside. Workers slept twelve to a room in bunks crowded near the toilets; the rooms were dirty and they smelled bad.”

There are 130 million such workers—almost all of them young and female—and all are migrants.  This migration to China’s manufacturing center, the behemoth cities of Guangzhou and Dongguan, just north of Hong Kong, has essentially emptied rural China of females under thirty. This is, according to the author, the largest migration in human history, “three times the number of people who emigrated to America from Europe over a century.”

The author, a journalist living in Beijing, spent several years following the lives of two factory girls and tells the story of this culture through their eyes. She becomes close enough to one of the girls to travel with her to her home village (a two-day journey via an incredibly overcrowded train) to celebrate the lunar new year; through this trip the story of rural China and the changes it has undergone in the last twenty years is expertly weaved into the book.

She also includes her own family history. This may seem to be odd at first in a story about factory workers, but the author’s ancestral history is centered around migration too, thus complementing the overarching story very nicely. (And it’s an engrossing story in its own right that includes lost wealth, a lost love, revolution, murder, refugees, and lots of paranoia.)

EXCERPT:
One-third of the world’s shoes are made in Guangdong Province, and the Yue Yuen plant is the biggest of them all. Seventy thousand people work at its Dongguan factory. Imagine the entire population of Santa Fe, New Mexico, under the age of thirty and engaged in making athletic shoes. Inside the compound’s brick walls, workers sleep in factory dorms and eat in factory cafeterias and shop at factory commissaries…. For young migrants, Yue Yuen offers stability. An assembly-line job brings only an average salary—about seventy-two dollars a month in take-home pay, in line with the city’s minimum wage—but it is paid every month, on time. Work is capped at eleven hours a day and sixty hours a week with Sundays off, rare for an industry in which laboring through the night is not unheard of. Yue Yuen workers sleep ten to a room in metal bunks, and this too is better than average. Young women typically pay middlemen one hundred yuan to procure a job here; men pay several times that. … Gangs thrive inside Yue Yuen. Some rob workers of their wages on payday; others focus on stealing shoe parts. The gangs practice a vertical integration of their own. One group may spirit shoelaces out of the factory, while another smuggles out soles. The parts are assembled into shoes and distributed in other parts of the city. In the universe of Chinese counterfeiting, theirs is a distinctive sub-specialty—the illicit assembly of authentic parts. The gangs are organized along provincial lines, and the ones from Hunan are the most feared.