Coming of Age in Mississippi 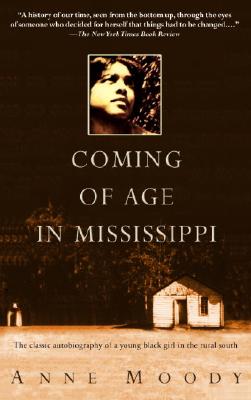 I saw this for sale in the textbook section of a university bookstore and bought it because (apart from the obvious reason that that it’s a coming-of-age memoir from the point of view of a young girl, perennially a favorite Book Shark genre) I was intrigued that an English professor intended to use it in the classroom. I once almost used The House at Sugar Beach in my own classroom, and wanted to see how Coming of Age would compare to Beach, since the two have similar subject matter.

Then I found out that Coming of Age is a classic of sorts, having been continuously in print (and used in high school and university classrooms all the time) for over forty years, and the author having won various awards and recognitions for the book, though she hasn’t written anything since the 1970s and in fact has pulled a Salinger-like disappearance, eschewing all publicity of any sort and generally being mysterious and secretive.

The book does not compare favorably to Beach. I wish I could tell the anonymous English professor to stop using it. “There are much better memoirs about race relations!” I would say to him or her. Because, clearly, that is why it’s used so much in schools—the author was front and center at the birth of the civil rights movement. She participated in all sorts of peaceful demonstrations for which she was jailed, including one of the lunch-counter sit-ins at Woolworth in Jackson. To protest the “Whites Only” rule at Woolworth’s lunch counter, Moody and two friends sat there for three hours, refusing to move. This wasn’t the first such sit-in at a Woolworth, but it’s the most famous because a large and violent mob gathered—with full police support—to harass Moody and her friends.

The problem is that after the author becomes a teenager, the writing becomes terribly dry and tedious. The first third of the book is just what I hoped for: a child’s point of view, perfectly told, of growing up in rural Mississippi in the 1940s. She describes the landscape, the people, and her own emotions with perfect clarity. But then she grows up and the tone changes. I became bored; I put the book down to begin another; I ended up skimming the last thirty or so pages. She recounts events as though they were a shopping list: I went to this college, made some friends, blah blah, transferred to this other college for a basketball scholarship, blah, blah, made some friends, blah blah, basketball, basketball, unhappy with that college so I left, joined a group, blah blah….

I spent a couple of minutes Googling Anne Moody after I finished the book, and I saw two interesting things. First, I saw this quotation from Moody herself, which explains everything: “In the beginning, I never really saw myself as a writer. I was first and foremost an activist in the civil rights movement in Mississippi.” There you go. That is why the book fails to be engaging right at the point that the author begins explaining her entry into civil rights: because she’s not compelled to be a writer telling a story; she is primarily compelled to tell about the struggle for civil rights. Many writers could both be a writer and tell the story of civil rights, but Moody cannot. Her narrative turns into a dreary history book.

The second thing I saw was a remarkable photo of the Woolworth sit-in. This is a gut-wrenching, painful photo. There is Moody (on the right) with her two friends, sitting at the counter while a mob of young white guys surrounds them, smoking and taunting and pouring sugar on their heads. This photo brings the event to life in a way that Moody’s account doesn’t even begin to. Looking at the photo, you think “Oh my god, that woman has a story to tell. How I’d love to know her thoughts and feelings from that afternoon…” I’m sorry to say that her written account of that afternoon is so empty of any emotion that I hardly remember reading it. 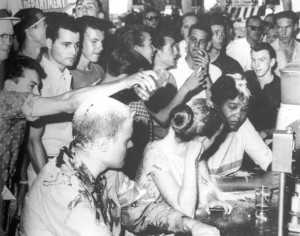 EXCERPT:
(from the beautifully told, emotion-filled childhood years. Note: George Lee is only eight years old here, and is babysitting the author, four years old, and her baby sister for the entire day while her parents are at work.)

“I’m goin’ to burn you two cryin’ fools up. Then I won’t have to come here and keep yo’ asses every day.”
As I looked at that stupid George Lee standing in the kitchen door with that funny grin on his face, I thought that he might really burn us up. He walked over to the wall near the fireplace and began setting fire to the bulging wallpaper. I started crying. I was so scared I was peeing all down my legs. George Lee laughed at me for peeing and put the fire out with his bare hands before it burned very much. Then he carried me and Adline on to the porch and left us there. He went out in the yard to crack nuts and play.
We were on the porch only a short time when I heard a lot of hollering coming from toward the field. The hollering and crying got louder and louder. I could hear Mama’s voice over all the rest. It seemed like all the people in the field were running to our house. I ran to the edge of the porch to watch them top the hill. Daddy was leading the running crowd and Mama was right behind him.
“Lord have mercy, my children is in that house!” Mama was screaming. “Hurry, Diddly!” she cried to Daddy. I turned around and saw big clouds of smoke booming out of the front door and shooting out of cracks everywhere. I looked back at Adline. I couldn’t hardly see her for the smoke.

After I gave up on the class, my only outlets were basketball, gymnastics and tumbling, and the church. I intensified these activities and never missed a day’s practice. Then I bought a piano for fifty dollars from a classmate. Now that I had the piano, I practiced all the time. Within a few months, I became the regular pianist at Centreville Baptist. I played for Sunday school and B.T.U., and the church paid me four dollars each Sunday. I was still working for Mrs. Hunt, so I was now earning a lot.
(Blah, blah, blah, blah…)