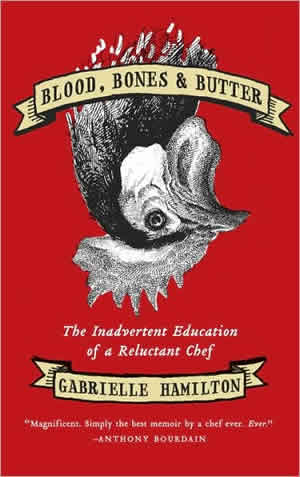 Hamilton has written a smart, funny book that stands out in the glutted chef/memoirist category in that she writes about her life—her childhood in rural New York, working on an MFA in fiction, her marriage and travels with her family to Italy—rather than just chapter after chapter about various restaurants. She does have her own restaurant in New York (Prune) but the chapters about it are mercifully brief and unlike many chef/authors, she does not focus on it in a way that sounds like one long advertisement for her restaurant.

Hamilton has a real talent for sarcasm and is at her best when ridiculing the hypocrisy and condescension of others. Her problem, however (and the reason for four stars rather than five), is that she seems to be unaware of her own tendency toward self-congratulation and smug superiority. Whether she is writing about cooking, other writers, opening a restaurant, being a mom, or even about being humble, she describes herself in terms that make it clear she is better at it than everyone else. This didn’t bother me for the first two thirds of her book—because she really is very funny and a very good writer—but there is a limit to even a smart, biting sense of humor if the author is always the most special person in the room and everyone else is an idiot.

Despite this drawback, Blood, Bones & Butter is a great read, obviously for anyone interested in an insider’s view of the restaurant life, but also for the the general memoir fan.

EXCERPT:
The reader reads aloud, with a sing-song up… then down… then down again cadence. My mood shifts from merely reluctant to derisive. It’s a tired reading style. I’m sick of it. It attaches more imortance to the words than the words themselves—as they’ve been arranged—could possibly sustain, and it gives poets and poetry a bad name….

Unbelievably, she’s reading from pages of pale green rice paper—they remind me of hundred-dollar bills—on which she has written by hand. We have computers, of course, in 1997. Her poem is not good but good-looking and well-dressed. She’s missed the point. She should be in bookbinder school. Blindfolded and spun around by her obsession with the handwritten word, the feel of paper, and the smell of ink, in this round of the game she’s pinned the tail far away from the donkey, right into the mantel. She still thinks that writing is about self-expression; I can just picture her, with a favorite callligraphy pen, sitting at her desk in front of the window where a spider plant hangs, a large table of expensive hand-wrought paper before her and a big bowl of milky sweet tea. And there in the weakening sunlight, she maps out a description of an old man’s hands—her own grandfather’s perhaps—with knuckles like like like…and ah, the metaphor comes, like pecans. Knuckles wrinkled and brown like toasted pecans.

She finishes reading and looks up at the room, smug and afraid simultaneously. We remain silent, some people’s eyes are closed though a couple of people sigh crisply, audibly, as if it say you have pierced my soul.