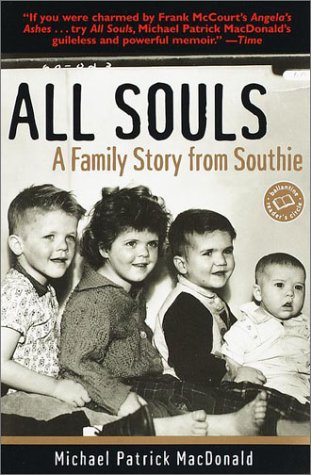 The six kids on the cover of this book (the photo wraps around to the back) are only the beginning of the story—the author and four more siblings are yet to be born! This is not, however, just another tale of an oversized, fatherless, Irish family living in poverty. This is, more than anything else, a thorough and horrifyingly graphic portrayal of a particular infamous neighborhood in South Boston—Southie—throughout the ’70s and ’80s, and it is a must-read not only for its illumination of this unique piece of America but also for the way the author conveys his emotionally fraught and complex emotions about growing up there.

Six of his siblings either die or have something terrible happen to them as a result of the drugs, murder, suicide and general violence that’s the normal course of life in Southie. (Thus his ambivalence about the place.) If you’d prefer not to know which siblings are affected by which traumas, beware of the list of names immediately following the Contents. I found myself consulting it frequently because eleven kids are pretty hard to keep straight, but it unfortunately lists dates of death as well as something else, and the book would have had an even greater emotional wallop if I hadn’t been prepared for what was coming. Just note the names and year of birth of all the kids on a separate piece of paper instead of consulting the list in the front.

Southie became notorious in the mid-seventies for its violent opposition to “forced busing,” the decision made by politicians in the rich part of Boston to force integration upon the racially segregated sections of South Boston: Black students from Roxbury would be bussed to Southie, and white students from Southie would be bussed to Roxbury—in theory. What happened instead was months of intense riots that were all over the national news, and most of the Southie children dropped out of school rather than comply. The author, though not quite ten, and his siblings were active participants as history unfolded in front of their house: they threw rocks at the buses filled with Black children, listened to the chants and speeches as helicopters flew overhead, and joined the crowds that lined the streets to taunt the police escorts.

It seems that one’s chances of dying in Southie were about the same as the odds of dying in a war-ravaged African country. I’m still struck by the chapter in which visitors are pouring into the hospital to visit one of the author’s siblings, and as he relates the names of them all, we learn all the ways in which they died in the years to come. (“Frankie McGirk came in once…. Not long after that visit, we heard the screams come down Patterson Way when he was stabbed to death over a drug debt.”  “Tommy Dooley came in too…. Two years later Tommy was killed by Tisha’s family outside Kelly’s Cork and Bull Tavern.”)  For three pages a parade of well-wishers comes to the hospital, and each ends up dying later in a different dramatic way.

This is a book with a lot of violence, but it’s tempered by the author’s ability to write with a great deal of emotional  honesty and insight.

EXCERPT:
If South Boston was its own world, Old Colony was a world within a world. Aside from the strolls up Broadway, we mostly spent our entire day in the project, especially in the summer when school was out. There was plenty of excitement. Every stoop had its own group of mothers and babies sitting all day, next to wading pools and a hose that spilled water onto the sidewalk and into the gutter. The water in the gutter was called polio water, because it stank so bad from mixing with mud and garbage, and if you ever stepped into it you were branded for a whole day as the one with polio on your sneaker. Skoochie and a few other shoplifters went door-to-door, with people excitedly calling them from windowsills to come up and show them the hot goods. Dizzo came down our street with his ice cream truck about five times a day, blasting the warbling recorded melody to “Three Blind Mice.” Dizzo knew everyone in the neighborhood and got out of his truck to share all the latest news with the women up in their windows or on the stoops, while kids poured out of the woodwork to buy their third or fourth ice cream for the day.

There was a commotion at Jolly Donuts. A cop stood at the intersection with his gun pointed in the air, and he fired a second shot. He was trying to disperse a crowd that was dragging a black man from his car. The man ran from the crowd as people threw rocks at him. More and more angry people ganged up on the black man, who I could see was crying. He was trying to get away, but there was nowhere to go. He ran to a house just outside the project, and tried to climb over a railing. “Kill the nigger!” my neighbor shouted. That was Molly’s mother, running to join the commotion. Everyone made fun of Molly at school because they had seen her mother bleeding down the legs of her pants more than once. They said she was so poor she couldn’t afford a Kotex pad. But she wasn’t as bad off now as the black man, who was clenching his fingers onto the railing of the house before the boys dragged him onto the pavement and beat his skull with baseball bats and hockey sticks. The people living in the house were no help; they booted his fingers off their railing. A photographer flashed his camera at the man from all angles: hands reaching for an escape, baseball bat to the ribs, crying face to the pavement. I remember the man’s tears clearing paths in the blood on his face. That’s how close I was to him. Scores of police came to the corner at Jolly Donuts and brought out their tear gas and riot shields, and another riot broke out. Kathy and Kevin brought me home and I was sick: sick of the police, sick of busing, sick of being thrilled or scared, and sick of the hate.