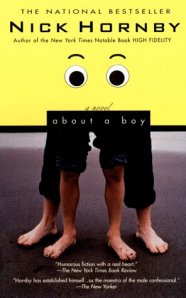 This cover is the worst, most misleading disgrace of any book I’ve read in the last five years. The googly eyes are actually raised from the page! They stick up! Everything about this cover screams Don’t take me seriously, I’m just fluff! And the dreadfulness doesn’t end with the art—the back cover copy is equally shameful because what is written actually has nothing to do with what the book is about. I strongly suspect the person responsible for it didn’t read the book at all.  According to the back cover, Will joins a group for single parents because he suspects that they’re good dating material—easy and desperate. He isn’t a father, though, so he invents a fictional toddler. “And it seems to go quite well at first, until he meets an actual twelve-year-old named Marcus, who is more then Will bargained for…” With the ellipses this ridiculous copy ends. Clearly we are meant to anticipate hilarious madcaps as Will keeps up the charade throughout the book, only to be found out at the worst possible moment because he has developed feelings of love for the child but now the relationship with the mom is ruined and everyone thinks he’s nothing but a deceitful cad and they’ll never understand that he truly cares about the boy…! In fact, the business with the singles’ group is over within the first quarter of the book. Everyone finds out pretty early on that he’s not really a father, and it’s not a big deal. And he was never interested in the boy’s mother. And his feelings for the boy are far more complex and realistic than this copy would have us believe. About a Boy is actually a decent story about relationships, with clever, believable dialogue and likeable, complex characters. Why, then, has it been subjected to this cover treatment? The publishers have gone out of their way to brand it as lad lit, so I sensibly refused to read it even after two people tried to convince me. Only after a third person hand-wrote a letter imploring me to give it a chance and explaining that there’s a suicide attempt (which I have to admit did make me feel a bit better about it) did I finally begin reading. It’s worthwhile, if you’re in the mood for a quick, funny book.

EXCERPT:
He’d always presumed that truants were different sort of people entirely, not like him at all, that they’d been born truants, sort of thing, but he was obviously wrong. In May, before they moved to London, when he was in his last term at his old school, he wasn’t a truant kind of person in any way whatsoever. He turned up at school, listened to what people said, did his homework, took part. But six months later that had all changed, bit by bit. It was probably like that for tramps, too, he realized. They walked out of their house one evening and thought, I’ll sleep in this shop doorway tonight, and when you’d done it once, something changed in you, and you became a tramp, rather than someone who didn’t have anywhere to sleep for one night.