A Land So Strange 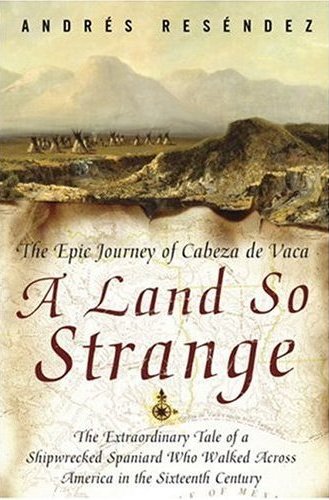 A Land So Strange: The Epic Journey of Cabeza de Vaca: The Extraordinary Tale of a Shipwrecked Spaniard Who Walked Across America in the Sixteenth Century, by Andres Resendez. Basic Books (2007), 326 pages.

This is a must read for anybody with the slightest interest in early American history. It tells the little-known story (why isn’t this story taught in schools?) of four men who were shipwrecked in Florida in 1528 and who subsequently traveled around the entire Gulf to present-day Galveston, then headed inland and walked all the way to the Sea of Cortez. Eight years later, in 1536, a group of Spanish explorers, having arrived via the Pacific Ocean, set out on horseback to explore the coast southeast of Baja. They were the first Europeans, or so they thought, to ever set foot in the area. They were dumbfounded to encounter two Spanish-speaking men, one white and one African, dressed as Indians. They were Cabeza de Vaca and Estebanico—two of the four survivors of the 300-man expedition to Florida eight years earlier.

This is the story of those astonishing eight years the men spent traveling across the width of a country that no European had ever laid eyes on before. They were enslaved (and escaped) at different times by several Indian tribes; they became fluent in numerous native languages; they built rafts and floated from Florida to Galveston, stopping along the way at present-day New Orleans to ponder the mouth of an awe-inspiring river “carrying so much water that the raft crews were able to drink straight from the sea”; they became revered as medicine men with miraculous powers to heal; and they were the very first people outside of North America to see the immense herds of buffalo, which, in the late sixteenth century, ranged as far south as southern Texas.

Cabeza de Vaca’s experiences offered a fork in the road of American history, an opportunity for an alternative history that would be almost unimaginably different, had his advice been heeded. After rescue, de Vaca returned to Spain and spoke passionately to the royal court (and anybody else who would listen) about the need to treat the Native Americans with respect and cooperation. His years of living among the natives convinced him that there was no reason Europeans and natives could not coexist peacefully, as long as the Europeans could be convinced to stop their practice of destroying native villages and enslaving all the occupants.  He was the first white person to view the new country as a source of not only material wealth, but of “good people” who had “spiritual wealth” to share. Ultimately, however, he was unable to sway anyone toward his vision of peace.

Estebanico, the other survivor who stunned the Spanish explorers near Baja, is surely one of the most astounding figures in American history. He was a Black man born and raised in Morocco, who was stolen by Portuguese merchants to be sold as a slave in Spain. There he was purchased by an explorer named Dorantes, who took him on the ill-fated expedition to Florida. The first Black man to set foot on American soil was a slave—yet over the course of wandering the country for eight years, Estebanico eventually came to be treated as an equal by his fellow castaways, and was certainly equally revered by the Native Americans during the period in which the survivors acquired a reputation as powerful healers. This man, enslaved on three different continents, was able to refashion himself as a powerful medicine man in Native American culture, which ensured that he would always receive the best lodging and would never want for food: “Natives who were treated by a medicine man were accustomed to giving everything that they possessed to him and even sought additional gifts from their relatives. Over the course of a few days with the Avavares, the four outsiders received so many pieces of venison that they didn’t know what to do with all the meat.” Estebanico’s story has the most interesting ending among the four survivors. He was the only one who chose to stay in America, but he unfortunately became a bit too accustomed to receiving anything he wanted; he was eventually killed by Indians who were upset by his demands for women.

A Land So Strange should be required reading in all high school history classes.