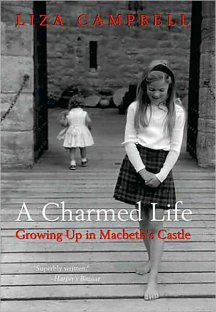 Cawdor Castle is fifteen miles east of Inverness, Scotland, an area with countless castles both standing and in various stages of ruin (nearby Loch Ness, to the southwest of Inverness, is the locale for many of them, including the picturesque ruins of Urquhart Castle, prominently featured in the most famous of the Nessie photos). Cawdor Castle is not only standing but has been continuously inhabited by an unbroken line of Thanes (feudal lords) since the early fourteenth century. Unbroken, that is, until the author’s father (the 25th Thane) inherits it in 1970 and over the course of twenty years annihilates the family’s properties through complete financial ineptitude fueled by alcoholism and madness. Now Cawdor is a tourist destination, open to the public from May until October, and the author’s brother—the rightful owner—is the first descendant in 600 years to have no claim to it. In fact, the author and her siblings must pay the admission fee of £8.30 and stay on the public side of the roped-off areas to view their childhood home.

This book has a lot going for it, foremost being the history of the castle and the people who lived there through the centuries. There’s the story of the Tree Room, a room that contains the trunk of an ancient dead tree:

The explanation as to why there should be a small tree preserved in the belly of Cawdor dates back to 1310, when William, the 2nd Thane of Cawdor, received a royal charter from Robert the Bruce to build a bigger fortification than his current castle, which guarded a boggy ford. Thane William’s first task was to study the surrounding district and find a location of improved strength, but in an unorthodox and seldom imitated move, he left this decision up to a donkey. William had had a vivid dream in which he was visited by a host of angels. They told him that he should place all his worldly goods in a chest and strap it to the back of a donkey; he must then allow it to wander freely all day and mark where it chose to rest for the night. If he built the castle on that spot, they said, it would prosper forever… The holly tree is where it lay down.

And of course there’s the Macbeth connection. Shakespeare set the play at Cawdor Castle despite the fact that it hadn’t been built when the real Macbeth and King Duncan lived (Macbeth became king after King Duncan was killed in 1040). Nonetheless, when Shakespeare’s Macbeth meets the three “weird sisters,” they predict that he will become the “Thane of Cawdor,” thus igniting his ambitious and evil plans. (Today, productions of Macbeth take place during the summer on the castle’s front lawn; see cawdorcastle.com for exact dates.)

The author’s stories—of both the castle and her childhood—are great, and her writing is peppered with unique descriptions (the cat approached “using a curious sideways step as if it had quietly studied dressage but now had prosthetic limbs”) and distinctive vocabulary. However, there is a major flaw: there’s very little immediacy to her story. She tells of events not as if she’s in the moment, but from the point of view of an adult looking back and telling stories about her youth. This leads to much “we would” this and “we would” that, and then this “would” happen. All this “would” is all wrong. I want to be there with her, not hear about it secondhand. (“Our ski party would fill a whole hotel…” “We would occasionally continue on to visit a family who lived at the bottom of the hill…” Better to be in the hotel as it’s happening, or walking to the bottom of the hill with her.) The book is not a cohesive telling of one story, the story of her life, but instead is more or less a collection of stories from the point of view of an adult. Not an ideal memoir for people who love the genre. However, it’s worth reading for anyone interested in British aristocracy and it’s especially worthwhile for those who appreciate slow descents into madness.